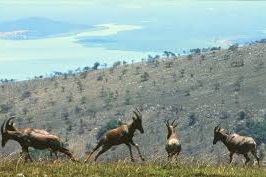 The Akagera River is one of the famous rivers in Rwanda and it’s the largest tributary of Lake Victoria contributing almost 34% of the water poured in the famous Lake Victoria. The Akagera river basin occupies an approximated 60,500 Square Kilometers of the portions from the four neighboring countries of Rwanda covering the largest portion of 21,630 square kilometers, Burundi with 13,790 Square kilometers and the Republic of Tanzania occupying 20,680 square kilometers and Uganda with the smallest area of 4,400Sqaure Kilometers .Rwanda Safari destination of Akagera national park offers a wonderful opportunity for travelers on their safaris and tours to Rwanda to explore the Akegare River which is shared by the main countries neighboring Rwanda.
The popular Akagera national park comprises of four hydro geographical zones and these include the Congo-Nile divide as well as the stunning Hills and mountain foot ridges which characterize most of the parts in Rwanda, The prominent Swamps habitat for different species of birds and wild life of the Akagera national park are also part of the river. Akagera River is worth a visit by any traveler who under takes wildlife safaris to Rwanda Akagera national park.
The Akagera river basin is sub-basin of famous Nile basin and basically the river begins in the nearby swamps as well as the lake terrain zone .River Akagera is mainly supplied with the three major tributaries such as the Nyabarongo River, Ruvubu rivers and Akanyaru River. This zone is mainly occupied by papyrus swamps which act as habitat to different bird species, wild life, lakes which offer water to the wildlife, birdlife of Akagera national park, open water and the river itself. The endowment of this swamp zone with the Akagera national park offers the wide opportunity where bird lovers can enjoy the views and sights of different bird species.
Most of the Akagera swamps are occupied by Cyprus papyrus species as well as Phoenix reclinata and the swamp is permanent home for rare Shoe-bill which is one of the species threatened to extinction in Rwanda the land of thousand hills and other water birds, hippos, buffaloes as well as giraffes, Sitatunga and impalas. The Akagera wetlands are the site for migratory water birds and this makes the area to be one of the best birding areas were one can enjoy bird watching safaris in Rwanda.
Besides being tourist attraction drawing many safaris to Rwanda, wetlands around Akagera are of tremendous importance to the nearby communities around, because the locals draw water for domestic use from the wetlands, they also act as fishing grounds, and some parts of the wetlands are used as areas where locals practice rice growing, Different raw materials used by the locals for handcraft-making, and building materials like grasses for livestock are all extracted from the wetlands.
Rwanda Safaris /Rwanda Safari News
Prime Uganda Safaris and Tours Ltd

Samuel Makanga2015-03-31T12:15:49+03:00March 31st, 2015|Gorilla Safaris News|Comments Off on What to know about the Akagera river and wetlands ecosystems in Akagera National Park-Rwanda Safari News