What to know about Mountain Elgon National Park-Uganda Safari News 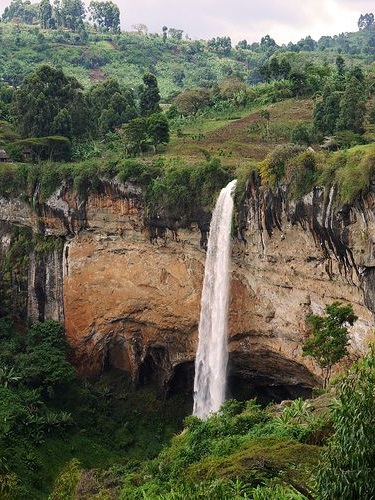 Mount Elgon is a massive solitary volcanic mountain situated on eastern part of Uganda and western Kenya. The park’s vast form, eighty kilometers in diameter, rises up at 3070m above the surrounding plains, providing welcome relief which is so surprising to visitors on safari tour to  Uganda. Its ragged terrain inaugurates variety to an otherwise tedious regional landscape. It’s cool heights offer breath taking atmosphere for hikers on Uganda safaris from the hot plains below and its higher altitude provide a refuge for flora and fauna which are stunning to any traveler on Uganda safaris to Mountain Elgon National Park.
Mount Elgon has been considered a regional landmark for decades: the extinct volcano is one of Uganda’s ancient physical features which first erupted some 20 million years ago. The famous mountain was once Africa’s highest mountain attracting many safaris in Uganda and Africa at large. Towering above Tanzania’s Mountain Kilimanjaro’s 5895m. However, due to millennia of erosion, it has reduced its height to 4321m, pushing it to 4th highest peak in East Africa region and 7th on the African continent. Hence attributing to the low hiking Uganda safaris under taken to the park because its often considered after the first highest mountains in the continent .Despite of its being the fourth highest in East Africa, its 4000Sqaure kilometers surface area is still offers the mountain a ranking of being the only mountain in world with the largest volcanic base. Therefore it’s due to this that different visitors from different corners of the world under take trekking safaris and tours to Uganda to explore this world remarkable natural feature.
The stunning Uganda safari destination of Mount Elgon is an important water catchment for different rivers which supply Africa’s largest fresh water body-Lake Victoria. The park’s forests receive up to 3000mm of rain each year, which they store and supply to support different floral, faunal life and more than a million local Ugandans surviving in the mountain’s adjacent areas. The mountain’s natural vegetation, and its role as a giant biological sponge, makes it a must visit destination for any traveler planning hiking safaris and tours to Uganda.
The Ugandan park, which was upgraded from a forest reserve in 1993, strenches to cover areas of 1,110 square kilometers and the park forms a trans boundary conservation area covering 2,229km2, which have been declared Man & Biosphere Reserves under UNESCO. The unexplored Mountain Elgon should  be the dream of any traveler seeking for an experiential Uganda safari.
Uganda Safaris/Uganda Safari News
Prime Uganda Safaris & Tours Ltd