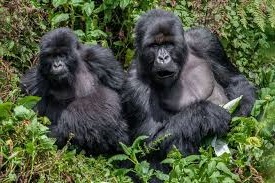 Uganda the country with diverse landscape comprising of lakes and rivers, valleys and gorges, swamps and wetlands, forests and woodland, open grasslands, mountains and undulating hills among other features has positioned herself in the region as one of the must visit destinations attracting a range of travellers to undertake safaris in Uganda.
One of the most notable features of Uganda’s landscape is the Virunga Volcanoes. Positioned at the extreme end of south western Uganda, the three Virunga Volcanoes are part of the greater Virunga Massif that stretch from Uganda across Rwanda to Democratic Republic of Congo and are usually encountered on Uganda safaris or Rwanda safaris.
The three Virunga include; the towering Muhabura (4,127m) followed by the short Gahinga (3,474m) and Sabyinyo (3,674m) which stand in series offering great scenic encounters that one can ever have while on Uganda safari tour.
These mountains have got dense volcanic slopes well versed with fertile soils favoring the flourishing of dense vegetation which in turn support counts of Mountain gorillas which provide the ground for gorilla trekking safaris in Uganda and good counts of golden monkeys that only exist in the Virunga ranges.
These mountains present ideal hiking encounters allowing you to explore vast landscapes and gaining vantage points that will enable you to view distant places including the forested hilly landscapes.
Uganda safaris/Uganda safari News
Prime Uganda safaris & Tours Ltd safari News