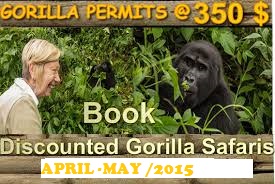 The gorilla trekking safaris and tours in Uganda are among the impressive safari packages that travellers can have in Uganda and Africa in general during their travel times. The mountain gorillas which are critically endangered thrive in only three countries of Uganda, Congo and Rwanda and significantly to note is that Uganda has almost a half of these species with Bwindi Impenetrable National Park alone having 400 mountain gorillas not counting those that thrive in Mgahinga Gorilla National Park.
Uganda gorilla trekking safaris and tours in Uganda require the possession of a gorilla permit issued by Uganda Wildlife Authority at a price of $600. This, it is such impressive news to hear that a discount has been offered on gorilla tracking permits in Uganda for the months of April and May reducing the price to $350.
The period which is always described as the low season is seeing the move as an endeavor to pull various travellers to undertake gorilla safaris and tours to Uganda to tap the opportunity presented by the season.
The discounted permits makes the Uganda gorilla safari cheaper and those who have low incomes or those who are interested in saving are encouraged to participate in the gorilla trekking experience in Uganda. Unlike Uganda, the gorilla safari tour destination of Rwanda maintains the price for the gorilla permit at $750.
Uganda safaris/Uganda safari News
Prime Uganda safaris & Tours Ltd safari News