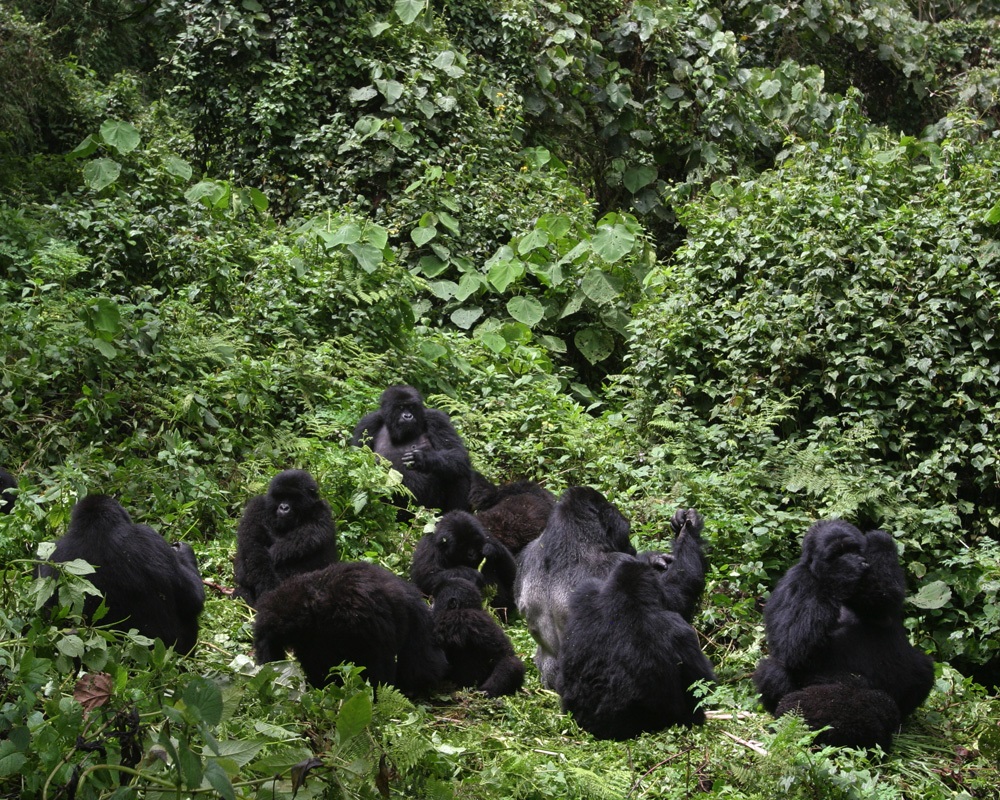 Mountain Gorillas are the main tourist’s attraction in Bwindi Impenetrable National Park that is drawing many travelers both local and international to undertake gorilla trekking safaris to Uganda’s Bwindi Impenetrable National park. The park is inhabited by an estimated population of about 400 individual mountain gorillas, which makes up almost half of all the remaining mountain gorillas in the world living in the wild. The other half of the mountain gorilla population is housed in the nearby Virunga Mountains covering three national parks of Mgahinga Gorilla Park in Uganda, Volcanoes in Rwanda and Virunga national park in Congo. A 2011 census of the mountain gorilla population in the park showed that its numbers had increased greatly from an approximated 300 individuals in 1997 to 320 individuals in 2002 to 340 individuals in 2006 to 400 in 2011.
Research exposes that Mountain gorillas in Bwindi mainly feed on fruits than that of the Virunga population, and also Bwindi gorillas including the Silver-back tend to climb trees to feed on foliage, fruits, and epiphytes. The best way one can prove the published literature about gorillas in Bwindi is by under taking gorilla safari tour to Uganda’s destination of Bwindi. Your Uganda safari tour to Bwindi will give you the opportunity to trek and spend one hour studying the way of life of the mountain gorillas protected in Bwindi Impenetrable national park. Within the one hour, you will identify the daily food eaten by the gorillas, how they build their nests in trees, among other unique activities done by mountain gorillas.
In Bwindi national park, mountain gorillas are habituated in four main regions within the park and these regions form the four prominent regions where tourist on Uganda gorilla safari tour can easily trek and encounter the mountain gorillas in the ancient Impenetrable forest. The four regions include Buhoma region which was the first region where gorillas were first habituated and opened in 1993 to tourists on their Uganda gorilla safaris to visit, Nkuringo region is one of the famous region with only one gorilla group, Rushaga and Ruhija regions. What is so interesting is that, all of Bwindi’s habituated gorillas are known individually by the rangers and have been given names in order to identify them. The male gorillas in Bwindi can weigh more than 500lb and some silver backs exceed 6ft.
Currently Bwindi has 11 habituated gorilla families and one group that is only available for research and the other ten can visited by visitors on gorilla trekking safaris to Uganda. These habituated groups include Mubare gorilla group, Habinyanja Gorilla troop, Rushegura gorilla group, Bitukura, Oruzogo, Nshongi, Nkuringo, Bweza, Mishaya, Kahungye, Busingye and the research group Kyaguriro.
Before embarking on your Uganda Gorilla Safari to Bwindi, we kindly encourage you to research more about these incredible creatures and read interesting facts about the various gorilla families habituated in Bwindi. This will help you to have wonderful gorilla trekking experience while on your Uganda gorilla trekking safaris and tours. What you should not is that, the mountain gorillas are wild animals and details such as the group size, their location in the forest and leading silver-back might change without notice hence be flexible when you find changes.
Uganda Safaris/Uganda Safari News
Prime Uganda Safaris and Tours Ltd