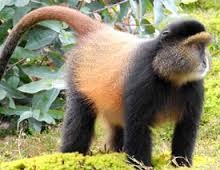 Ugandan national parks are endowed with different primate species but the common ones to be trekked are the Mountain gorillas and Chimpanzees in Kibale national park .Taking safaris and tours to Uganda mainly in the country’s smallest part Mgahinga national park offers you chances to trek the undisturbed park ‘s rare species of the Golden monkey.
Besides gorilla trekking safaris in Uganda, there is a great opportunity which no traveller should miss of having a direct eye contact with old world monkey species only now found in the Mgahinga national park in south western Uganda and other Virunga Volcanic mountains of central Africa. The rare species is only restricted to the high land forests, mainly ones dominated by the bamboo vegetation.
Trekking this opportunistic feeder primate makes the trekker to have golden experience which comes at cost of trekker booking a safari to Uganda, but the reward got is better than the cost. Finding out that IUCN endangered golden monkey mainly feeds on the young bamboo leaves, fruits, flowers, shrubs and bamboo shoots and what is so unique with it is that its diet is mainly determined by the availability of the fruits.
The golden monkey will move in between areas depending on the season and this makes trekking this species very interesting because it involves tourist moving in the jungle of forest and in the process they come across different birds, wildlife species and also enjoy the natural beauty of Mgahinga national park one of the Uganda safari destinations in which the golden monkeys are found. During the season where ripe fruit is available they will remain in those areas. When the seasons of rain pour starts, shooting of the bamboo start to be seen and this means that the golden monkeys will rarely move and hence can be easily trekked in such seasons and areas. Research found out that areas with many bamboos and fruits attract most golden monkeys and always they will regularly visit that area.
The endangered golden monkey is endemic to the areas of Albertine Rift valley, and the strategic location of Mgahinga provides a rare chance to track these unique striking natural creatures, especially in the high altitudes where the dense green bamboo forests on the Gahinga trail are found. There is an estimated 3000-4000 individual in the Virunga area which 42-60 are habituated in Mgahinga.
The Park’s varied medicinal plants and fascinating Garama Cave can be explored with a Batwa guide – this tribe of hunter-gatherers was the region’s first settlers, and their traditional know how of the forest remains unrivaled. When you visit this important park while on a safari in Uganda, the guide will know which areas are most frequented by each species of animal.