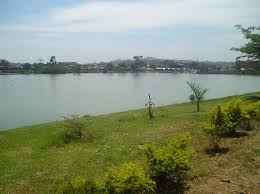 Kabaka Lake is the Uganda’s and perhaps one of Africa’s longest surviving man-made lakes. The lake has brought in many safaris to Uganda

The water body is at one of the royal place of kabaka, in Rubaga. The lake was built by Mwanga, the King of Buganda in 1886 to create a channel which was to take him to his palace in Lubiri and in Munyonyo.

Kabaka Mwanga II is one of the previous kings known in history for his ruthlessness. The king seeing that his people were disobeying and no longer respecting him decided to order for the arrest and killing of the young Christians who refused to denounce their faith he did this to scare his people form turning away from him. The killing of these young men who are now known as the Uganda Martyrs worldwide has led to increase in safari visits since Christians from all over the world comes to attend the masses held for the memory and perseverance of these young men.

The king is known for his ruthless and this has made people not to consider his good performances. The lake was one of  his greatest achievements and now the lake is attracting very many safari visits to Uganda and it is being use to host big events in the tourism industry which shows how great his lake is to the country and to the Buganda Kingdom the activities in the lake includes ferry for transporting passengers and giving tourists the experience of the lake, water sport activities plus other activities which provide tourists with the experience to take home hence attracting safaris in Uganda.

The man-made lake is very important as it accommodates various bird species and thus a birding spot for tourists. Various bird species can be seen flying from all over the lake. This beautiful lake is leading to increase in the number of safari tours.