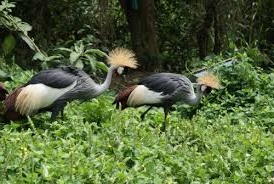 Uganda wildlife Education center was opened in 1952 by the colonial government, the main reason for opening it was to help out endangered animals so that they can get some habitats where they can stay.it was mainly to protect the sick, injured, orphaned and the confiscated animals which might be taken by the poachers. This helped greatly at increasing the number of safaris to Uganda.

The sanctuary boasts variety of animal species which are protected with in the park, these include; the reptiles, mammals, birds, and many primates. All these have greatly attracted many safari tours to Uganda. The animals which are kept within the Zoo include; the lions, leopards, chimpanzees, giant forest Hog, buffalos, monkeys and many more.

The birds which are found at Uganda Wildlife Education center include; the common shoe bill which is the most loved bird by the tourists who come for safaris with in Uganda. Others include; African grey parrot, fish eagle, ostriches, spotted owl, African rock python, there are also crocodiles, and the tortoises and these have greatly contributed high revenues to the tourism sector.

The Education centre has greatly improved the tourism since the many people who cannot visit the national parks have used the chance to watch the animals in the zoo. It’s always open to individuals, families and groups, schools and many foreign visitors. There are also day activities for the children and the entertainment for the adults. The zoo is located in Entebbe District along the shores of Lake Victoria.