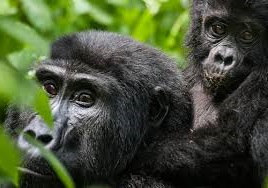 Gorilla Trekking Safaris and Tours in Uganda are the major highlights of all the safaris and tours done in the Pearl of Africa -Uganda .Currently the main reason as to why tourists visit Bwindi Impenetrable national is that the park is more known as very secure and more reliable destination with serene environment in which visitors can physically have face to face encounter with the world’s rare species of Mountain Gorillas.
Uganda gorilla safaris present tourists with an opportunity to visit the Bitukura Gorilla Family located in the Ruhija gorilla trekking sector in Bwindi national park, western parts of Uganda. Trekking gorillas in this area avails you chance to spend time with the 14 individual members of the Bitukura gorilla group and among the 14 even involve the 4 silver backs who are the leaders of the group and they place significant role of protecting and guarding the group from attacks that can be caused by other wild gorillas as well as other enemies.
The true fact about this group is that the group derived its name from the river that owns the similar name and it was in this river where this gorilla group was first seen. Bitukura gorilla group was habituated in the month of July, year 2007 from that time it was protected under tender care making it get used to human beings and not until in the month of October, year 2008 when it was officially opened for tourism and then tourists on gorilla safaris in Uganda were allowed to encounter it.
The uniqueness with in this group is that its habituation process took shorter time of only 15 month which is different from other groups whose habituation process usually takes at least two remarkable years. But the hidden secret in this group is that, it had close bond and attachment to the Kyaguriro gorilla group, with whom they regularly interacted with and in the process they could have regularly physical encounters with the Uganda wild life authority rangers and hence got used to human beings very fast.
The unforgettable fact about this group is that the Bitukura group at first had 24 individual gorilla members but due to various factors the ground has experienced reduction of its members to current total number of 14 individual members only left. This peaceful gorilla group usually encountered on Uganda gorilla trekking safaris and tours composed of four silver backs and among the four , the second youngest known as Ndahura is the leader of the group and he assumed power from the his former leader Karamuzi who has retired at the age of roughly 42 years.
Taking a gorilla safari to Uganda will enable you to know more about the interesting human brothers living in the forest jungles of Bwindi impenetrable National park located in the district of Kisoro western part of Uganda.
Uganda gorilla safaris/Uganda gorilla safari News
Wild gorilla safaris  Ltd