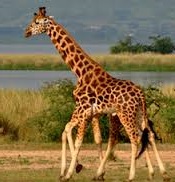 The Rothschild giraffe is one of the most sought after Uganda safari products that at the moment thrive in Murchison Falls and Kidepo Valley National Parks only at the Uganda standards.
In a bid to ensure the diversification of national parks and enhancing their capacity in being attractive to the travelers on safaris in Uganda, some population of Rothschild giraffe will be transferred to Lake Mburo National Park in south west of Uganda.
Lake Mburo like other national parks in the south west of Uganda has no Rothschild giraffes thus bring in the giraffes to its rolling savannah landscapes dotted with acacia species would definitely contribute to its attractiveness and prompt world travelers to include it on their travel itinerary while planning safaris to Uganda
According to Mr. Atimnedi Patrick who is a conservation expert in the Uganda Wildlife Authority overlooking this exercise, a count of eight giraffes with the composition of four (4) males and four (4) females are to be relocated from the Uganda safari tour destination of Murchison Falls National Park and the exercise is planned to take 3 weeks. Upon arrival in Lake Mburo National Park, the giraffes will be first put in a boma which is a secure area as they get acclimatized with the park.
The Lake Mburo National Park has proved a friendly habitat for the giraffes as it has plenty of acacia woodland that act as food for them. Lake Mburo is the closest park to Kampala with 3½ hours drive and as population of Impala and Burchells Zebra along with other grazers. It provides a perfect en route break while to Bwindi on the gorilla trekking safaris in Uganda
Uganda safaris/Uganda safari News
Prime Uganda safaris & Tours Ltd