The reason to trek gorillas in Uganda – Uganda safari news 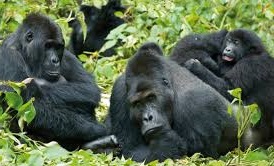 The worlds critically endangered mountain gorillas are among the heavily sought after species in the world today. Their conservation status have put them in the lime light and every world traveler has developed a feeling of having a glance at them before the eventually get extinct as some may think something that have resulted in gorilla trekking safaris and tours in Uganda.
The truth is that mountain gorillas are not in Uganda alone. Though Uganda has about 412 mountain gorillas, the remaining 468 are shared by Rwanda and Democratic Republic of Congo in the Virunga massif. But one would ask himself that in  three destinations, where should i undertake a gorilla trekking safari of a life time. The answer would be none other than trekking gorillas in Uganda.
Trekking gorillas in Uganda is rewarding in terms of gorilla experience and then beyond gorillas themselves. First of all the Bwindi Impenetrable National Park where 400 of these species thrive is a unique park of its own. It is marked by mature trees with dense undergrowth making it an impenetrable forest. The terrain is very challenging as it is hilly with steep lopes and narrow valleys, the beautiful birds sing all over the forest, remember it is the number one birding spot in Africa according to Africa bird Club and this indeed puts the guest experience during gorilla trekking safari in Uganda to go beyond gorillas. Encountering gorillas in such habitat is very rewarding and not only does it give him/her full value for money which is actually $600 very affordable compared to $750 in the neighboring destination but also exposes one to magical experiences that would form a gorilla safari of a life time. The volcanic hills of Mgahinga are rewarding too offering the impressive views of the Lakes below in the Kisoro sub region, impressive Kigezi Highlands and the Impenetrable forest of Bwindi. This makes the Uganda gorilla safaris in both Bwindi and Mgahinga memorable.
The drives involved an e scenic encounters en route make Uganda your favorite spot for gorilla trekking. Bwindi for example is 527 km from Kampala which is a whole day drive traversing the lush country side and gaining impressions of what it has to offer. The Uganda Equator stop at Kayabwe enables you to justify the geographical divide between the north and southern hemispheres, the traditional Ankole range lands where the beautiful long horned cows are seen grazing alongside Zebras and Impala emerging from Lake Mburo National Park while the traditional lunch stop at the Igongo Cultural Center which is among the largest privately owned museums in the region combine to generate lasting experiences while on your gorilla safari in Uganda. More importantly is the easiest incorporation of wild game viewing is either Mburo or Queen Elizabeth National Parks that is hardly found nowhere else in destinations where mountain gorillas are found. A combination of the above thus qualifies Uganda as the best gorilla trekking destination.
Uganda gorilla safaris/Uganda gorilla safari News