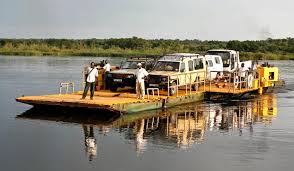 The Uganda safari destination of Murchison Falls National Park situated in the north west of Uganda is famously known as a great destination for wildlife safaris in Uganda. The park is traditionally known for being a habitat to the big five of the land animals including the buffaloes, elephants, lions and leopards before Rhinos got extinct in 1983 though they were later re-introduced in the nearby Ziwa Rhino Sanctuary. Murchison Falls National Park is traversed by the world’s longest river – the Nile River leaving a permanent natural feature of the world’s powerful Murchison Falls. The Nile bisects the park in two portions of the north and south sections respectively thus travellers on safaris and tours in Uganda connecting to either of the regions require a ferry to cross the Nile.
The ferry has operated at Paraa jetty for several years and it has become a heritage of the park. Operating on scheduled timetable, the ferry enables Uganda safari undertakers to connect to the north for game drives and those connecting to the south for connection to Hoima and visit to the top of the falls.
It is sad to note that this traditional ferry will be out of service on 23 Feb 2015 for maintenance. Though this will cause inconveniences, it will present smooth and safety ferry running once it resumes service on 25th Feb 2015.
Uganda safaris/Uganda safari News
Prime Uganda safaris & Tours Ltd safari News.