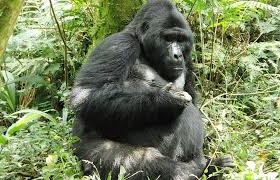 Positioned in the south west of Uganda, Bwindi Impenetrable National Park has got almost half of the world’s critically endangered mountain gorillas that have formed the ground for gorilla trekking safaris in Uganda. Extending to over 321km2 of Afromontane forest, the hilly landscapes of Bwindi that lie between the altitudinal levels of 1,160 – 2,607 Km above sea level have presented themselves as the ideal habitats for these endangered species.
400 of the 880 mountain gorillas that are apparently thriving in the wild with none known to be thriving in captivity live in Bwindi Impenetrable National Park and are always encountered on Uganda gorilla safari tour. Before the emergence of gorilla safaris in the early 1990s, mountain gorillas were like any other wild animals and their conservation efforts were very limited thus threatening their survival. The emergence of gorilla tourism saw them being habituated to accommodate people which attracted the interest of people towards them and their general conservation thus gorilla tracking activity was introduced as another strategy of conserving them.
Thriving in the four (4) regions of Bwindi namely; Buhoma, Ruhija, Rushaga and Nkuringo, Bwindi Impenetrable National Park has got twelve habituated gorilla families that are encountered on gorilla safaris and tours in Uganda and Rwanda. Buhoma has got Habinyanja, Rushegura and Mubare while Ruhija has got Kyaguriro, Bitukura and Oruzogo. Rushaga has Bweza, Kahungye, Nshongi, Busingye and Mishaya while Nkuringo has got Nkuringo gorilla family.
Uganda safaris/Uganda safari News
Prime Uganda safaris & Tours Ltd safari News