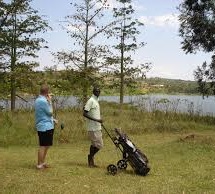 Murchison Falls National Park positioned in the north west of Uganda is a rich Uganda safari tour destination with a wide range of attractions and tourism activities. Some of these include the thrilling game drive in the northern section of the park which exposes you to wild game species like giraffes, lions, Jackson’s hartebeest among others and the Nile launch cruise which exposes you to the aquatic dwellings of the world’s longest Nile River such as Nile crocodiles and Hippos.
The Madvani Group under its trading section the Marasa Holdings Limited expressed the interest of setting up a golf course close to one of its luxury lodges named Chobe that offer accommodation to Upmarket clients on Uganda safaris and tours in Murchison since 2006 though it received a negative feeling from a range of conservationists in Uganda.
Despite the Presidents support, the golf course move was rejected by the Uganda Wildlife Authority and the National Environmental Management Authority citing its negative effects to the environment and its disgrace in the protected area.
Following several years of hassle, the Madvani Company eventually let go of the venture and took up the proposed alternative land at Karuma Wildlife Reserve. The then  Uganda Wildlife Authority Executive Director Dr. Andrew Seguya noted in his explanation to the parliamentary committee on Trade and Tourism that following several discussions with Marasa they have reconsidered the site for the golf course to the neighbouring Karuma Wildlife Reserve – something he noted that it would serve all interests for the travellers wishing to do safari tours to Uganda, public, investors while avoiding negative impacts.
The golf course which is known for consuming a lot of water and at the same time encouraging chemical applications would have had a lasting effect on the biodiversity in Murchison Falls National Park thus affecting the tourism products that are normally encountered on Uganda safaris.
Uganda safaris/Uganda safari News
Prime Uganda safaris & Tours Ltd safari News.