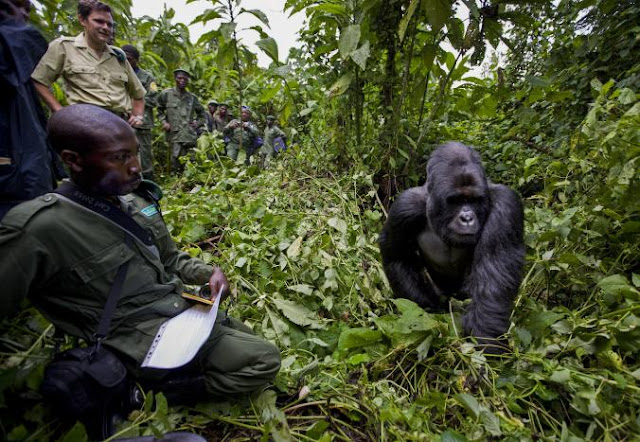 Within the gorilla, habitats are other species that are endangered flora and fauna species and these include chimpanzees, elephants, and leopards, as well as several types of monkeys. And there are many more, all important and all living in gorilla habitat and either endangered or threatened, including two types of pangolins, African golden cats, Grauer’s swamp warblers, hooded vultures, a frog, and even a type of mouse as well as a cherry tree. These beautiful species are part of those endangered creatures that you can sight on a Rwanda gorilla safari, Uganda gorilla trekking safari or gorilla safari Congo.

Mountain Gorillas are also endangered species with a lot of threats yet sought after African safari wild species. Conserving them helps them multiply in number and increase the number of Uganda safari, gorilla safari Rwanda and Congo gorilla safari tourists which help with the development of the specific countries. Many people are involved in the gorilla trekking tourism with thousands employed in the country to help thousands of travellers have a glimpse of these elusive gentle giants.

Conservation should really be everyone’s concern because it helps not only the gorillas to survive but many wild species and still helps many people support their day to day livelihoods.

In East Africa, not only are Mountain Gorillas conserved but then many organizations are doing conservation efforts to see wildlife continue to thrive in the jungle and increase on Rwanda wildlife safari, wildlife safari in Uganda, Kenya safari and Tanzania safari tourists. One of the most conserved Kenya tour destinations in the Maasai Mara Game Reserve that extends to Tanzania wildlife safari destination of Serengeti National Park. This is the best place to sight millions of wildebeest.

Gorillas, like all wild animals, play an important role in their environment. Without these large-scale grazers eating lots of vegetation, the natural balance in the food chain would be disrupted. This could negatively affect other wildlife in the area, and ultimately the people who depend on that environment for food, water and other resources.

Ecotourism; socially and environmentally responsible tourist visits, including carefully guided trips to see gorillas are an important way for local people to gain benefit from living in close proximity to gorillas. It’s estimated that one mountain gorilla can indirectly generate £2.5 million over its lifetime from tourist income.

The main threat to gorillas is people and the associated increasing pressure on the gorilla’s habitat. With so few individuals in the wild, the mountain gorilla is listed as critically endangered. The good news is, their numbers have recently been rising. It’s not too late for us to protect our mighty mountain cousins.