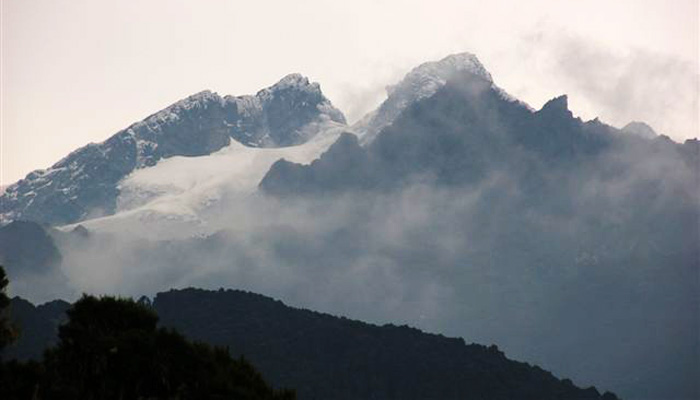 Incase you enjoy hiking  (5,119 m) high, snow capped  Mountains Rwenzori – formerly known as the ‘Mountains of the moon’- shall offer unusual experience you have been desiring. Mountain Rwenzori is the highest mountain range located in African region. It borders Uganda in the west with Democratic Republic of Congo, they are at times called the ‘Mountains of the zMoon’.

Rwenzori Mountains National Park was declared a World Heritage Site to protect and preserve the fauna and flora, natural beauty of the area. Rwenzori Mountains are truly a mountain range created due to up lift caused by earth crust via tectonic movement and they are formed by faulting. Its range is 48 km in width and 120 in length.

These mountains are often wrapped in mist plus cloud with peaks rare usually not seen from far away. At the center of the range, there are six peaks wrapped by permanent snow, 3 with glaciers. The highest of these peaks and the third highest peak in African region is peak Margherita rising 5102 at the altitude.

Rwenzori Mountains were official publicized as a National Park in 1991. The Park is surrounded by 996 km2 of rugged mountain terrain giving visitors unusual experience of an Afro-Montane rainforest. These are forests that start over 3000 m including some giant forms of Groundsel, Heather and Lobelia.

Many trip to Rwenzori Mountains offer fascinating rewarding experience which must be well planned. The only key to an exciting and enjoyable Uganda tours and safaris must be prepared! The central circuit hike spends 6 nights/7 days and covers an altitude of 14,000ft (4,267m) higher than the sea level.

Conditions on the mountain  challenge experienced hikers for  this mountain is well known for its high altitude, steep terrain, cold temperatures, bogs, mud,  un-engineered, steep and slippery trails and frequent rainfall.
Nevertheless, you can try it out! It’s such an exciting experience since the length of time of July-August, December-February are indeed dry for inexperienced hikers.

Porters shall carry for you heavy equipment plus food hence leaving you with camera, water,  a rain gear,  any other light luggage, warm clothes and small pack. You will be able to buy your own food, Rwenzori mountaineering service can provide you with cooks and cooking utensils

THE CENTRAL CIRCUIT TRAIL
DAY ONE: (NYAKALENGIJA-1,615m TO NYABITABA HUT-2,651m) The trailhead is found at Nyakalengija, 22Kmiles from Kasese off Fort portal Road. The RMS arranges transport from Kasese to the main office at Nyalalengija, where you will be required to pay park fees plus completing the arrangements.  Campsite is set which makes it safe for parking near the office.  It’s a 10Kmiles from Nyagalengija, passing first through cultivation than through forest, five-hour ascent to the Nyabitaba Hut. And there is a piped water supply at the hut.

DAY TWO: NYABITABA HUT TO JOHN MATE HUT (3,505m)
It ranks the longest and involves a lot of energy for a day’s walk. It is a minimum of seven hours walk. From Nyabitaba Hut, the path moves through forest for a relatively short time before it crosses Bujuku River at the Kurt Scehafer Bridge which was built in 1989. In between that bridge and Nyamileju Hut, the path is so good for a couple of hours however it gets steeper and rocky as you enter the moorland zone where heather plants are prolific.  Per herbs you may want to stop for lunch at Nyamileju where there is little-used rundown hut and also a rock shelter. Soon after leaving Nyamileju, the path passes via a giant heather forest and follows the Bujuka River. John Matte hut is approximately a two-hour walk from Nyamileju. The hut is probably a two-hour walk from Nyamileju. The hut is 200m from Bujuku /Kitandara huts.

DAY THREE: JOHN MATTE HUT TO BUJUKU HUT (3,962m)
The hut is 5 hours walk considering the condition of those two Bigo Bogs which are more often knee-deep in mud. On your way to the hut you shall pass via Lake Bujuka a really fabulous setting in between mounts Speke, Baker and Stanly. Water is 20m from Bujuku hut. Bujuka hut is the base for reaching Mount Speke of which you need to spend one more night there to do this. Incase  you are interested to climb to the top most point in the range,  peak Margherita on Mount Rwenzori (5,109m), one  must do this from Elena Hut(4,541m), which is about 2km from  the Loop Trail plus 3 hours walk from either Kitandara or Bujuku.

DAY FOUR: BUJUKU HUT TO KITANDARA HUT (4,023m)
After Bujuku hut you will go up to the top most point on the Loop Trail, the Scott Elliot Pass (4,372m) before going down to the two Kitandara lakes. The hut is near the second lake.

DAY FIVE: KITANDARA HUT TO GUY YEOMAN HUT (3,505M)
It is a 5 hour walk, beginning with a steep upward journey to fresh field Pass (4,282m) and move down to Bujongolo cave (3,720m) the lowest part used by 1906 expedition to a greater extent along the trail at kabamba cave (3,450m). There is a waterfall also rock shelter where you can spend an overnight instead of Guy yeoman Hut.

DAY SIX/SEVEN: GUY YEOMAN HUT TO NYAKALENGIJA
For only 5 hour, you will descent from Guy Yeoman Hut to Nyabitaba Hut. You can either stay overnight at the hut or else continue at Nyakalengija which will take 3 hours.