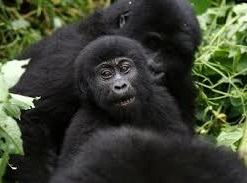 In Rwanda gorilla trekking is carried out in Volcanoes National Park. Gorilla tracking in Rwanda has got rules and regulations which tourists follow while on their safaris in Rwanda. These are put in place to provide protection to the tourists, gorillas and the local people. These include the following.

Compliance is one of the tools needed. Tourists should appear humble in front of the gorillas so as to avoid any inconvenience on your gorilla safari in Rwanda. Tourists should avoid looking straight in the eyes of the gorillas because they can run after you. However when the silverback runs after you, you just need to squat down without making any kind of noise and the guide will also be there to guide you.

Gorilla trekking in Rwanda is only carried out by people above 15 years as those below can carry out some other cheap tracking. 8 persons per group are allowed to trek the gorillas. Tourists are not allowed to eat in front of the gorillas because they may also be attracted to join them which may cause problems. Flash cameras are not allowed therefore tourists should have cameras with zoom lens.

The good health of the gorillas is always maintained so as to have their number increasing hence more gorilla safaris. Tourists with airborne diseases are not allowed to track gorillas because they are also the same as humans. Spiting and sneezing is not allowed in the parks. Tourists should not beat their chests near the gorillas because the silver back takes that as an assault and will definitely run after you. With all that you will have a great gorilla tracking safari in Rwanda.