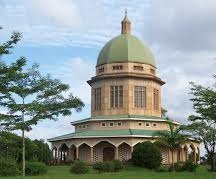 Religious sites  are some of the tourism attractions in Uganda which are not fully exploited and explored by different tourists while on their Uganda safaris and yet the country is endowed with different religious sites which are mainly concentrated within Kampala the Capital City of Uganda .Therefore for any traveler seeking religious experiences in form of spiritual blessings, Uganda the pearl of Africa is the best destination in Africa.
Namugongo Martyrs’ Shrine situated just some 12kms from central part of Kampala along the Kampala-jinja road is one of the best religious sites in Africa. The site is where 32 young Ugandans where massacred under the orders of Kabaka Mwanga when they refused to denounce the Christianity faith which was spreading at fast rate by then in Uganda. Under taking Uganda Safari Tour to Namugongo Martyrs Shrine will offer you that golden opportunity to explore the well decorated shrine structures .The structure of the shrine is built in modernistic way which gives it metallic appearance that is appealing to any travelers who spares time to visit the site. Each and every year on 3rd of June, pilgrimages from different parts of Uganda, Africa
The other prominent religious site is Gadhafi Mosque also dubbed as Old Kampala Mosque. The mosque strategically situated in one of the Kampala famous hills in old Kampala hill is the biggest mosques in Uganda .The location of the Mosque in the hill gives tourists on Uganda safaris an added advantage to marvel at Kampala city. The site also has unique architectural design which is eye-catching to different travelers on their safari tour in Uganda.
The famous Gadhafi mosque named after the Late President Gadhafi’s contribution towards its constructions is focal point for Kampala’s Islamic community as well as the only place where new mosques in Uganda are imposed.
The other notable religious site is Bahai Temple which is the only one of its own in the whole of Africa. The site which was opened in 1962 lies in Kikaya Hill just six kilometers from Kampala main Center on the Gayaza Road. The site is the only spiritual worship place to Africa’s Bahai adherents .The Temple’s gardens are lush with green vegetation all over the compound. In addition, Namirembe Cathedral is one of the religious sites which deserve visit by each and every traveler on Uganda safari tour. The structure of the site shows the most impressive colonial-era building in Kampala.
Uganda Safaris/Uganda Safari News
Prime Uganda Safaris and Tours Ltd