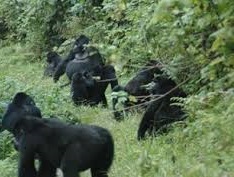 Bwindi impenetrable national park is located in the south-western and it has got many attractions which have attracted many safaris to Uganda. The park comprises of 331 square kilometres of forests and also contains both lowland forest and montane  . The  vegetation has attracted the increasing number of mountain gorillas which are found in that park.

The national park is one with the richest ecosystems in Africa has also got diversity of species, the park harbours 120 species of mammals , 348  bird species,220 butterfly species, frogs and many more. The park has got flowering plant species which include 163 tree species and 104 species of ferns. All this has attracted many tourists to come for Uganda safaris.

The park is also a sanctuary for  the chimpanzees, Colobus monkeys and many bird species like the hornbill and the turracos. The park has also got 0ver 340  gorillas,making half of the world’s population of  gorillas remaining in the wild. There are 4 mountain gorilla groups which are open for tourists who come for gorilla tracking safaris.

The tourists have found it easier to track gorillas in Bwindi impenetrable national park since the number of gorillas has certainly increased in Uganda; this will help in attracting more people to travel to Uganda so that they can have a chance to view mountain gorillas.  gorillas can also be trekked in Rwanda in volcanoes national park and also in Virunga national park which is found in Congo.