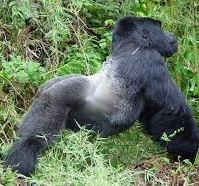 The Mountain gorillas are worldly critically endangered Ape Species that have thrived in the mountains of Uganda, Rwanda and Congo for centuries past until of recent when they were brought to the lime light of the international world resulting into gorilla trekking safaris and tours in Uganda and Rwanda.
The 98% of the genetical component between the gorillas and humans is one of those things that one gets to hear of when planning a gorilla safari to Uganda. Following the four years of research by the Willcome Trust Sanger Institute based in UK, the results revealed that that 98% overlap amidst the humans and gorilla genomes.
The researcher indicated that good counts of our genes are much related and also identical to the gorilla version of the similar gene. In fact while on gorilla trekking in Uganda, one direct sight in the eyes of gorillas thriving in its natural habitat brings out this truth intuitively.
However, one has to note that the possibilities of encountering Mountain gorillas are limited as they are only 880 of them thriving in Bwindi Impenetrable Forest and the Virunga Massif. The 400 of these apes thrive in Bwindi alone which gives it an advantage in terms of gorilla populations over other habitats and makes it a darling for world travelers thus opting for Uganda gorilla safaris and tours. Due to these enormous numbers, the protected area boasts of many habituated gorilla families than any other park in the region. The count of twelve (12) gorilla families distributed in four regions present a rich ground for gorilla tracking safaris in Uganda.
The aspect of mountain gorilla conservation can date back to the time when Fredrich Robert Von Beringe, a German Army Captain brought the bones and the skin of an ape that he had shot in order to document their existence as they were unknown to the western world. The Mountain gorillas had existed in their natural habitats undisturbed by human diseases, weapons or traps for centuries in the misty highlands of the east and central Africa.
Gradually, the poaching issues, human and animal diseases, baby gorilla abductions, unrest and wars and habitat loss started to pose an effect on the health of these primate species. However in 1980s, the numbers of mountain gorillas started to rebound probably because of the works of Dian Fossey which had run for 18 years inspiring the formation of conservation policies that were then pursued eagerly by the respective Authorities in the countries of Rwanda Uganda and Congo, the Dian Fossey International Fund and the International Gorilla Conservation Programme along with other partners. The efforts towards the gorilla and their habitat conservation have generated positive results despite the pressure of increasing population numbers and poverty in the region where they thrive.
The rise of gorilla trekking is seen as one of the sustainable ways through which mountain gorillas can be gradually conserved while generating good returns to the governments and the communities that surround their habitats. In gorilla trekking encounter, the conservation message is passed on carefully to the trackers on gorilla safari tour in Uganda or Rwanda. During the briefing session, the dos and don’ts are made clear to the guests among which include the observance of 7m distance to avoid disease transmission. For example in 1988, a count of 6 mountain gorillas lost their lives in Rwanda to a disease that looked like Measles. The lives of other 65 mountain gorillas were at stake and the veterinarians used the dart guns to vaccinate them with the human serum and surprisingly it worked. It was from then that the seven meter rule for individuals on gorilla safari and tours in Uganda and Rwanda was empathized to avoid such occurrences.
The guide’s consideration to machete a path where visitors can pass while tracking gorillas to reduce on the gorilla habitat destruction by visitors and the consideration of only one hour for visitors to have a direct encounter with these apes is a consideration of conservation values.
The maintenance of gorilla habitats and the gorillas themselves is very significant requiring a lot of funds. The gorilla tourism is one of the avenues to raise these funds. No wonder, huge sums are always charged from gorilla trekkers like $600 for Uganda and $750 for Rwanda in order to keep up with the maintenance of gorilla habitats and giving to the communities that surround these areas.
Uganda gorilla safaris/Uganda gorilla safari News
Prime Uganda safaris & Tours Ltd