Mountain Elgon features the largest extinct volcano surface area in the world which first erupted around 24 million years ago. Being the fourth highest Mountain in Eastern Africa, Mountain Elgon has the second highest peak Wagagi which is approximately 4,321 meters in Uganda. At the top the Mountain Elgon surrounding by a series of rugged peaks it contains craters covering over 40 kms at the top. 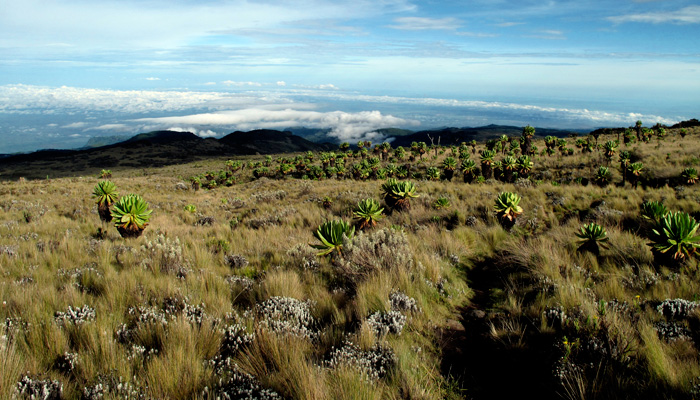 Located in the Eastern Region of Uganda on the Uganda-Kenya border, Mountain Elgon has the largest volcanic base in the world with the base being at 4,000km². it is the largest and oldest solitary volcanic mountain in the all of East Africa covering a total area of about 1,279kilometers with a stretch from Uganda to Kenya. The National park being shared between the two countries, Uganda covers the largest part of the National park’s total area of about 1110 kilometers spanning the districts of Mbale and Kapchorwa. The remaining part of the National park being possessed by Kenya with only 169 kilometers.

Mountain Elgon rises 3000 meters above the surrounding plains and it has a diameter vast form of 80km with a higher altitude providing a refuge for flora and fauna. Mountain Elgon consists of five major peaks that is Wagagi at 4,321 meters, Sudek at 4,302 meters, Koitobos at 4,222m, Mubiyi at 4,211, and Masaba having 4,161 meters.

In 1929 the area where the park lies was first gazetted as a forest reserve by the British protectorate government. The reserve’s boundary was surveyed and degazetted in 1937 to provide land for settlement to the locals and later in 1940 the area was named Mt Elgon Crown forest and in 1951 Mt Elgon Central Forest Reserve. The size of about 20 villages with a total of 60kilometers that is 6,000 hectares were set aside from Mt Elgon Forest Reserve by the Ugandan Government in 1983 to resettle the Benet-Ndorobo people who had lived all their lives in the forest in order to protect the forest reserve from destruction and also ensuring that landless people are not abandoned.

The district leaders and the civil servants who were in charge of distribution of the 20kilometers or 6,000 hectares amongst the landless people of Benet Ndorobo, unfortunately they did not but instead shared out the land amongst themselves and some few people that they wished to have part of the land. In the year 1994 the reserve was finally declared a National park by the Government of Uganda under the management of Uganda Wildlife Authority.

The National park has a variety of wildlife species within its boundaries and the vegetation cover along the mountain slopes which are a habitat to buffaloes, Defassa’s waterbuck, elephants, spotted hyenas, and squirrels. The park is also a home to a few primates such as black and white colobus monkey, red tailed monkeys and blue monkey.

The vegetation of Mountain Elgon National park is characterized and composed of open moorland stubbed with giant lobelia, tropical montane rainforest and groundsel plants. The park has rich fertile soils that are red laterite and also a water catchment area having a number of rivers such as River Lwakhakha and Nzoia which flows to Lake Victoria, River Suam draining into Lake Turkana in Kenya.

The slopes of the mountain are covered with less tropical montane forest moving up to 2500m in altitude and having the tree species here include the Elgon teak, podocarpus, Oleahochstetteri, prunus africanas, Cordia among others.

The higher altitude between 2500mm and 3000mm is the bamboo and low canopied forest which is characterized with bamboo Arundinaria alpine and pod carpus. The altitude above between 3000 and 3500m is the heath zone being characterized by grassy swards dotted with pink and white everlasting flowers, giant heather, red hot pokers, blue delphiniums and flame colored gladioli among others.

Mountain Elgon National park is a home to over 300 bird species and the 40 of these birds are restricted range species. The bird species here include the black collared apalis, the moustached green tinker bird, and Jackson francolin. The Hartlaub’s turaco, Tucazze sunbird and the bronze napped pigeon which are limited to the Ugandan highlands. The bird species which are found on the either side include the common Whitethroat Cape Robin-Chat, Blue-shouldered Robin-Chat, Northern Anteater Chat, Little Rock-Thrush, Nightingale, Mountain Yellow Warbler, African Reed Warbler, Upcher’s warbler, Little Rush Warbler, common Chiffchaff, Green Hylia, the Uganda and Brown woodland warblers, Yellow-bellied Hyliota, Rattling cisticolas, thrilling and white-browed crombec.

The most accessible caves are Khauka cave on Wanale ridge and the Kapkwai cave near the Forest Exploration center and these caves are situated on the slopes of mountain Elgon. These caves acted as shelters for locals and their livestock. The caves later provided manure in form of bat droppings.

There are three waterfalls best know at Sips Falls and are located just outside the park on the Kapchorwa road and the lowest has the most spectacular a cascades over 100meters., and the second being known as Simba and it plunges 69meters. The other easily accessible waterfalls are found at chebonet, Wanale, Sisiyi and Bulago offering spectacular views.

Tewali Hill is situated outside the park and it overlooks the Sipi Falls. In the year 1960s the king of the Sabiny usually meet his subjects from this hill. At the top of Tewali Hill gives you stunning views of the three water falls, the wagagai peak and the Karamojong plains.

This Forest Exploration center works as an educational center for schools at the same time also the trailhead for climbers to Caldera using the sipi trail. The area has three circuits of between 3-7 kilometer. This makes it easy for the visitors to visit waterfalls, caves, escarpments and observe bird species which include African Hill Babbler, Alpine chat, Black-throated wattle among others.

Mountain Elgon National Park is a home to over 300 bird species and it offers excellent opportunities for birding and the species include African Blue Fly-catcher, African Goshawk, Chinspot Batis, Cinnamon Bee Eater, Black kite and Black-collared Apalis, Mackinnon’s Fiscal, Baglafecht, Dohertys and Luhders Bush-shrikes. This is done around the Forest Exploration center of Kapkwai along the loop trails to Cheptui Falls.

The Nature walk takes a few hours to a full day and enjoys views of the Sipi Falls with the guides of the locals and also the hike gives access to the Walls of Death that is from Budadiri to Mudange cliffs located in the tropical forest and this offers opportunities of citing black and white colobus monkeys, blue monkeys and the baboons.

This also involves a 20 minutes African Sunrise trek across the Karamoja plains on the peaceful walks outside the mountain Elgon.

There are 14 routes of climbs which requires various levels of rocks scaling techniques and the 35m climb is the toughest and the 15m is the easiest and the Rock climbing takes place at Sipi outside the park.

This involves a visit to Sipi widows’ Group and offers opportunities of finding Arabica coffee grown on the mountain Shambas with a guided walk by the Sipi widows’ Group while learning about Sabiny’s life and the local residents.

This is done outside the park at the top of the three waterfalls at Sipi and largest fish caught weigh 3kgs and it is restricted to designated places and sites and the sport fishers bring their own equipment.

Getting There; How to get to Mountain Elgon national park Uganda

3 Days Kibale NP Chimpanzee Trekking Safari in Uganda is primarily motivated by exploration of Chimpanzees in the forest of Kibale that has been termed as the Primate.