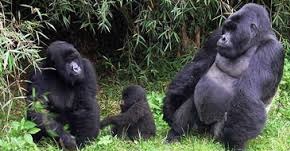 The Uganda gorilla  trekking safari destination of Mgahinga Gorilla National Park is gifted with the habituated gorilla family that thrives on the slopes of the three Virunga Volcanoes namely Muhabura, Sabyinyo and Gahinga.
The Nyakagyezi gorilla family which is always encountered in gorilla trekking safaris in Uganda has ten (10) members which are identified by their names including Baby Rukundo, Nshuti, Nvuyekure, Mutagamba, Bugingo, Mathew and Mark and has been under the leadership of Bugingo for the past years but surprisingly, Mark is noted to have taken over his leadership.
Bugingo Silver back which is estimated to be 53 years old is still thriving with the family which is not a common case with the gorillas as the overthrown silverbacks tend to resort to a lonely life abandoning the group for example what happened in Mubare gorilla family in the Buhoma north of Bwindi gorilla National Park where gorilla safaris in Uganda are also carried out.
Though the Nyakagyenzi gorilla group has been noted to have frequent crossing to Democratic Republic of Congo, it has settled now for some time on the Uganda side presenting an assurance for travelers who would wish to visit Mgahinga on their gorilla trekking safari to Uganda.
Mgahinga Gorilla National Park is the second park in Uganda with mountain gorilla population and is part of the great Virunga massif where counts of 480 mountain gorillas park known to be thriving. It is 519km from Kampala about 10 hours’ drive. The presence of the three volcanic peaks, the gorge and the remarkable flora make the Uganda gorilla safari tour to Mgahinga Park memorable.
Uganda gorilla safaris/Uganda gorilla safari News
Prime Uganda safaris & Tours Ltd