Conservation in Lake Manyara National Park Tanzania began in the 1920s when the area was being used as a sport hunting ground, in 1957, the area was designated into a game reserve which was further elevated to the national park status in 1960 and in 1974, Lake Manyara was increased by 550ha to bring it to its current land size of about 325sqkm. It should be noted that the national park covers the north eastern quarter of Lake Manyara which spans to about 200sqkm

This Africa wildlife safari in Lake Manyara can’t be considered complete without sighting Lake Manyara, an alkaline or salt lake due to its lack of river outflows. This lake is fed by several streams that get to drain their water from the adjacent Ngorongoro plains and also numerous underground streams. Lake Manyara is a very shallow lake and its deepest point is measured at around 3m or 10ft. Due to its shallowness nature and alkalinity, most of its water evaporates in the dry season and its salinity increases tremendously as well but lake never completely dries out as it continues to be fed by the underground streams. This lake is visited by the majority of animals here because its salty water adds the much-needed sodium mineral to their diet.

An Africa safari to Lake Manyara National Park gets you on a collision course with some of the stunning African wild mammals as it features many wildlife species and these include an array of wild game like the African elephant, plain zebras, leopards, cheetahs, lions, dik dik, masai giraffe, hippos, banded mongoose Thompson and grants gazelle, defassa waterbuck, blue monkey, rock hyrax, baboons, blue wildebeests and klipspringer. 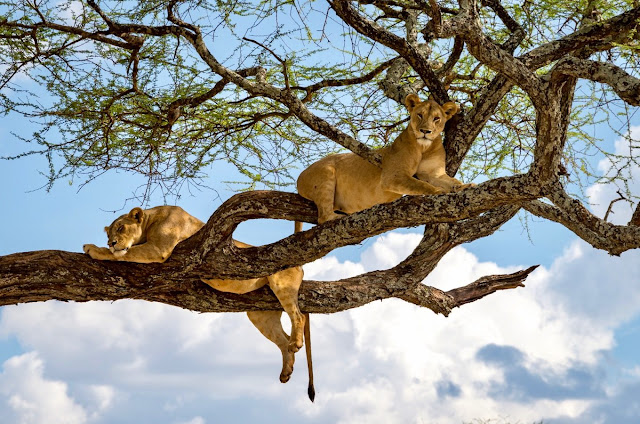 The wildebeests of Lake Manyara remind me of a Kenya wildlife safari to Masai Mara National Reserve which is visited by these wild animals during their annual migration from the LakeManyara through Serengeti National Park. and finally ending their journey in Masai Mara national reserve. This annual natural spectacular sees over 2 million animals journey across the savanna plains of these conservation areas making covering hundreds of kilometres. If would like to witness this great natural spectacle, you need to synchronize your Africa safari visit to any of these parks between the months of June to October.

This Tanzania wildlife safari to Lake Manyara bears so much resemblance to Uganda wildlife safaris to Kidepo Valley National Park because of the underlying similarities between these 2 parks. A Uganda wildlife safari to Kidepo valley  National Park also comes with thrilling encounters of a diversity of wildlife as its home to 4 out 5 of the big Africa game which include lions, leopards, cape buffaloes, African bush elephants with the rhinos being the only ones missing, Kidepo valley park has ranked the 14th best African best safari park for a classic wildlife adventure by Safari Bookings a famous international online safari company which Prime Safaris is proud to be in partnership with given its spectacular sceneries and diverse wildlife.

If you’re an ardent birding fanatic, then an African birding safari to Lake Manyara  National Park refreshing as this park is a host to about 180 bird species which include southern ground hornbill, lilac breast roller, greater flamingo, lesser flamingo, marabou stock, pink backed pelican, palm nut vulture, yellow billed stock. Lake manyara is also home to a variety of about 670 plant life species which include a tall tree forest near the gate to the national park with tree species like ficus sychomorus, broad leaved croton, rauvolfia caffra, tabrnaemontona ventricosa, cyprus laevigatus and also a number of baobab trees dotted in the park. 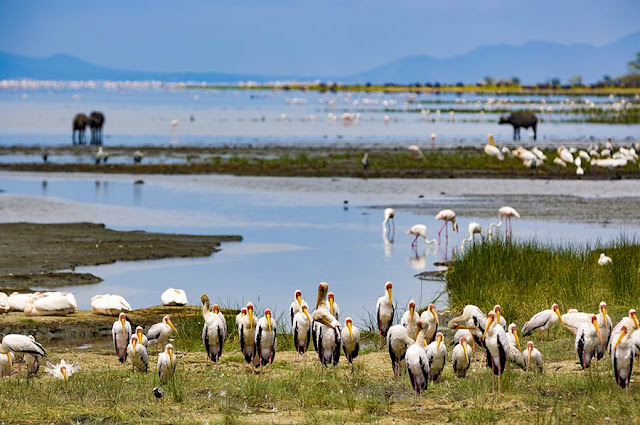 Just like your Africa birding safari experience to Lake Manyara National Park, when you visit Uganda, you will realize that Uganda is such a big birding destination given the whopping 1070 bird species count that roams the vast savanna and tropical forest species of Uganda. A Uganda birding safari to Uganda birding destinations such as Queen Elizabeth National Park, Semuliki national park, Lake Mburo National Park and Kibale forest national Park will get you fascinated with Uganda as these birding sites are to over 800 bird species. Birds aside Uganda isn’t only famous for being the land of avian diversity but also for being the gorilla destination, you would never want to miss out on your Africa gorilla safari adventure.

Yes, Uganda is home to the majestic mountain gorillas which are critically endangered with the entire species being survived by about 1000 individuals that can be found in the parks of Bwindi and Mgahinga. A Uganda gorilla safari to any these parks gives you chance to encounter some of the 400 gorillas that habituate within the geographical boundaries of Uganda. A gorilla trekking safari Uganda to either Mgahinga Gorilla Park or Bwindi Impenetrable National Park gives you an opportunity to encounter any of the 19 gorilla families that are found in these parks. Gorilla trekking isn’t only done in Uganda since these gorillas are also found in Rwanda and Congo.

In Rwanda, Rwanda gorilla safaris take place in the Volcanoes National park. During gorilla tours Rwanda expect to encounter any of 11 gorilla families that have been habituated to give you an ultimate gorilla experience. Gorilla trekking in Congo, on the other hand, occurs in Virunga National park or Kahuzi Biega National Park. What is so special about Congo gorilla tours is the possibility of encountering 2 unique gorilla species. If you decide to visit Kahuzi Biega National Park Congo during your Congo gorilla safari, then expect to meet the eastern lowland gorillas while, if you decide to go to Virunga National Park then an encounter with the majestic mountain gorillas is eminent.

Back to Lake Manyara

As you plan your visit to Lake Manyara, you have to mind that this park experiences a typical savannah climate with 2 rainfall seasons that come in the months of March-May with the longer and most of the annual rains and November- December with the shorter rains of the year. Annually Lake Manyara National Park receives around 750-1000mm of rain. The average annual temperatures in Lake Manyara National Park are high with temperatures ranging between a minimum of 25oC annually and a maximum of about 32oC on average annually.  The best recommended time for a safari Tanzania to this park is during the dry season when the all the murram roads here are easily navigable and the.

I hope with all this information, you be able to make an easy choice to visit this pristine Africa wilderness for your wild Africa adventures. Hope to see you there.

In case you would like to have your African trip to east Africa easily organized without much hustle, try out Prime safaris or Wild Gorilla safaris, these local tour companies that have overtime managed to master the art of creating ultimate Africa safari memories for thousands of their clients who have visited any of the five East Africa destinations of Uganda, Rwanda, Congo, Kenya and Tanzania.

Congo as well is another gorilla destination and we have numerous Congo gorilla safari packages that will take you on a Congo gorilla tour adventure to either Virunga National Park for an encounter with mountain gorillas or Kahuzi Beiga National Park where you will encounter Eastern lowland gorillas. Besides gorilla safaris and wildlife encounters in Uganda, you can still explore Uganda’s diversity using any of our wide range of day trips that visit other sites that are near the capital city Kampala or Entebbe international airport such as a Mabamba birding day trip to Mabamba island Kampala city tour day tour Jinja day tour and 1 day Ngamba island chimpanzee safari. Check out our great east Africa safari to such as Kenya safari tours and Tanzania safari tour that take you on an Africa wildlife safari adventure to Kenya and Tanzania respectively.