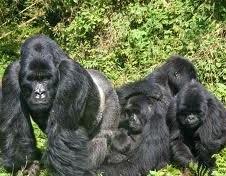 The groups for gorillas are called troops headed by dominant male gorillas called Silver back. A silver back is named because of its distinctive scrap of silver hair on its back and also the canine teeth due to maturity and it is usually 12 years of age. These rare animals have continuously attracted many tourists to come for gorilla trekking safaris in Uganda. A group contains one male, several females and their offspring’s. There is also another troop of the multiple- male gorillas.

Female Mountain gorillas  are more than male disband from their natal troops. The male make their own troops  which attracts the male to join them. Male gorillas sometimes remain in their troops and work as assistants to the silver back however the male can mate with the female or become dominant in case the silver back dies. These are all interesting things that one should not miss seeing as they come for gorilla tracking safaris.

With the eastern lowland gorillas, to be protected from leopards when the silver back dies, they stay together till when a new silver back is transferred to their group. This protects them from being eaten and increases their total population hence promoting more gorilla tours in Uganda. However for the male group the female and their offspring’s find a new group in case the silver back dies.

Much is interesting about gorillas like their friendship with humans, eating habits, walking style and more than you expect as you come for gorilla trekking safaris.If one wishes to come for gorilla tracking safaris in Uganda Prime Uganda safaris and Tours Ltd is the best company that can organize for  you a Ultimate safari tour that you will find interesting and desire to come for more gorilla safaris in Uganda.