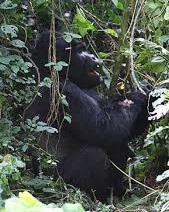 Volcanoes National Park is strongly famous as a tourism destination due to the park’s ability to act as home to numerous species of the mountain gorillas and this has attracted many mountain gorilla trekking safaris to Rwanda and many visitors to the country of thousand hills tend to consider their trips to be incomplete if they do not visit Volcanoes Park.
Volcanoes National Park in Rwanda is the prime location of the Virunga Mountains which are shared between the three countries of Rwanda in the volcanoes, Uganda in the Mgahinga Gorilla Park, and lastly Congo in the Virunga national park. The precious, magnificent Massifs occupy vast area approximated to be over eight thousand square kilometers covering almost all the three extinct volcanoes and the six active volcanoes. Mountain gorillas do not know anything about the borders so they keep on crossing from Rwanda to Uganda to Congo. The massif provides the best habitat for the mountain gorillas and Volcanoes national park in Rwanda cherries of half of the total number of gorillas in the world and this makes the park the most admired by most of the travelers on Rwanda gorilla safaris and tours.
Volcanoes National Park is well known because of the American primatologist identified by the names of Dian Fossey established gorilla research Centre and even her tomb is found in this place.
The town of Musanze which is the nearest town to Volcanoes is the famous hub of Rwanda’s gorilla trekking safaris and the town is surrounded with different cafes, lodges and restaurants, bars among other facilities which enhance visitors stay in destination. The town which is popularly known as Rushengeri is served with good road network system which only takes visitor 1-2hours drive from the country’s capital Kigali. From the town visitors link to the main headquarters of the volcanoes park near the village of Kinigi ,a place where visits meet for morning briefing before they start the actual activity of trekking the mountain gorillas.
Mountain gorillas safaris in Rwanda particularly to Rwanda’s destination of volcanoes national park offer an ultimate gorilla trekking experience which cannot be got somewhere else and this has been the reason as why most travelers book safaris to Rwanda because they want to have that one hour to interact with the one of the family group mountain gorillas habituated for tourism purposes in the Rwanda’s wonderful Volcanoes national park.
Rwanda Safaris /Rwanda Safari News
wild gorilla safaris