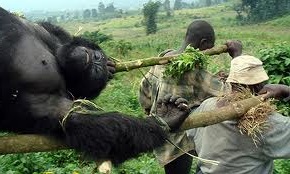 As four poachers are on a run only known as Mbabazi, Bagoro and Kashabe, there are three poachers suspected for having viciously killed a male mountain gorilla of about 12 years old in Bwindi Impenetrable National Park which is 530 km from Kampala and lies in the south western Uganda.  These poachers were arrested and their names are Bemugisha, Byamugisha, and Kazongo who live in Kanungu district. This will teach a lesson to the rest of the poachers and help maintain the number of gorillas so as to promote more gorilla safaris in Uganda.

The traps that were arranged by the poachers to trap edible animals like antelopes, monkeys and many others instead caught the male gorilla as he was trying to stop the poachers from hunting the dogs died immediately. The male gorilla was the only black back in the Habinyanja mountain gorillas and it was known as Mizaano. These are known as black backs because of their lack the silver hair at the back. This is a very bad act since it reduces the number of gorillas however the tour operators are striving so hard so as to fight this and promote more gorilla trekking safaris in Uganda and hence improve the tourism sector.

The investigation that was carried out by the CTPH headed by Dr Stephen Lubanga showed that the male gorilla was speared in the lungs through the shoulder’s right side which made it to suffocate hence a cruel death. A high number of mountain gorillas are found in Bwindi Impenetrable National Park however they are affected with diseases, low birth rates and encroachment on their habitat. This has reduced the number of gorillas in Uganda. The tourism board is therefore trying to solve all these problems so as to increase the number of people who come for gorilla tracking in Uganda.