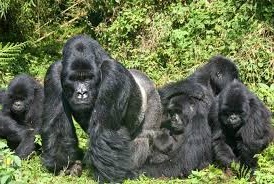 Uganda gorilla trekking safaris and tours are the most rewarding safaris enjoyed by visitors on Uganda safari holidays to Bwindi Impenetrable National Park. Bwindi impenetrable national park is the only natural forest in Uganda housing almost half of the world’s endangered species of the mountain gorillas and these have been habituated for tourism and research purposes.
Bitukura gorilla family is one of the habituated gorilla groups in Bwindi and this can be explored by any visitor on Uganda gorilla safaris to Bwindi Impenetrable national park. The gorilla group franked in the famous Ruhija gorilla trekking sector in Bwindi national park is an interesting gorilla group one should spend time with.
Bitukura gorilla group is composed of 14 individual mountain gorillas and this includes the four silver backs who co-work together to lead the other group members. Sparing time to trek this particular gorilla group while on your Uganda gorilla safari will enable you to confront the four silver-backs which play vital role of protecting and safe guarding the Bitukura group from any enemy attacks.
The real facts about Bitukura gorilla group is that, the troop attained its name from the river that they were first sighted. The charming Bitukura Gorilla troop was habituated in July, 2007 and from that time; the group was protected and guarded under tender care making it to accustomed to human appearances. It was in the year 2008, when the group was publically opened to tourists on Uganda gorilla safaris.
Not like other gorilla groups, Bitukura gorilla group is the only mountain gorilla group that took less than 15 month during the habituation process. The reason as to why the group took short time is that was connected to the Kyaguriro gorilla group, with whom they mainly interfaced and this helped the group to get used to human being.
The most peaceful Bitukura Gorilla troop at first had 24 members and the number has reduced to 14 gorilla group. Confirming your Gorilla safari to Uganda will allow you to explore more about this most impressing gorilla troop living in the ancient forests of Bwindi impenetrable National park franked in the Kisoro, Kabale in south western part of Uganda.
Uganda Safaris/Uganda Safari News
Prime Uganda Safaris and Tours LTD