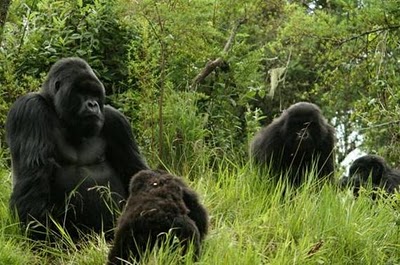 The Rwanda gorilla safari destination of Volcanoes National Park has ten (10) habituated gorilla families that thrive on the slopes of the Virunga Volcanoes where they have survived for centuries past.
Previously studied by the legendary Dian Fossey, the Susa A gorilla family is one of the most sought after gorilla families by travelers on gorilla trekking safaris in Rwanda because of its special touch to the famous gorilla conservationist and its long time existence.
Deriving its name from the local river named Susa that flows through their place of abode, the Susa A gorilla family presents itself as the hardest gorilla family to trek considering the fact that it dwells in the highest slopes of the Virunga Volcanoes However, to neutralize this challenging hike, the trackers from the Rwanda Development Board would ascertain where the group is the evening of the previous day so as to provide smooth trek to the next trekkers on gorilla safari in Rwanda. Because of its distant and yet challenging movements, gorilla trekkers have been stopped at times to explore it.
With a family size of twenty eight (28) gorillas, Susa A is gifted with three (3) silverbacks. Amazingly, the group was even larger with 42 members before splitting to form the Susa B. During that time, when one encountered it during his/her gorilla safari in Rwanda, the eyes could only land on gorillas everywhere.
Apparently, the joyous moods in the group are brought up by the two playful twins Impano and Byishimo and poppy which is among the oldest habituated gorillas. Poppy is known to have been born in 1976 and is among the first gorillas to be habituated by Dian Fossey. Exploring the Susa A gorilla group while on a gorilla safari in Rwanda is one of the memorable encounters that one can have in Rwanda.
Rwanda gorilla safaris/Rwanda gorilla safari News
wild gorilla safaris and tours ltd