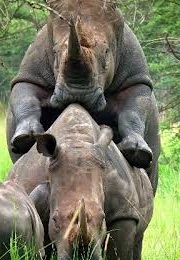 Ziwa Rhino sanctuary was founded between the collaboration of Uganda wildlife Authority and the rhino fund in Uganda, this was done since the number of rhinos was reducing in the country and this affected the number of safaris to Uganda.

Ziwa rhino sanctuary offers a nice place where the population can easily be expanded through breeding. These rhinos are protected from the predators and the hunters, this means that the numbers of Rhinos is to increase and this will help in increasing the number of tourists who come for Uganda safaris.

The rhinos are protected by the rangers and the guards and the sanctuary is protected by the fence is surrounding the whole area, it has got over 40 mammals and even reptiles which include; the antelopes, monkeys, hippos, bird species and the crocodiles, all these have attracted many people to come for safaris in Uganda hence increasing the revenues of the country.

The sanctuary has also got more tourist facilities which cater for the tourists who come for safaris in the sanctuary; these include the lodges, the hotels, guest houses and camping grounds, all these have helped in improving the sanctuary since the number of tourists have increased.