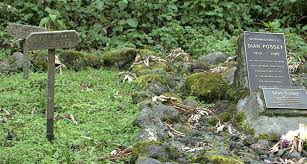 Dian Fossey was American researcher, zoologist  who settled in the Rwanda’s volcanoes park and established karisoke gorilla research Center in the year 1967. The prominent researcher was well known by locals Rwanda’s living with the park as Nyirmachabelli, a word that directly means “the woman who lives alone on the mountain’. The work of this zoologist helped a lot in the protection and conservation of the mountain gorillas which are today the main reason why tourists take gorilla trekking safaris to Rwanda. The sudden death of conservationist in year 1978 was a big setback to conservation and research about the mountain gorillas.
Taking gorilla Trekking safaris and tours to the grave site of the Digit Dian Fossey Tomb is one activities tourist on Rwanda safari while touring Volcanoes national park should not miss. The trek involves a rewarding 30 minutes’ drive full of scenic views from the park headquarters through the trail head to reach the Karisoke research camp where the tomb of the fallen conservationist is lying.
The walk and hike full of wonderful views and sights of forest hogs, elephant forest, primate species as well as bird species takes tourists on the Rwanda tours and safaris but visiting the tomb one and half hours from the park boundary to the karisoke research center.
This hike is an incredible and memorable physically experience, intellectually and emotionally. It is so motivating and inspiring to learn about someone who gave up herself to protect and conserve the world cheered mountain gorillas. The hike to the grave site involves tourists moving through the green lush forests as well as hiking up the slopes. The experience is very rewarding but needs tourists to be physically fit and experts in hiking. The magnificent experience comes when the hiker reaches the summit of the mountain which is the highest peak among the eight Virunga Massifs.
At the grave site where Dian was buried traveler on gorilla trekking safaris and tours in Rwanda will find the old traditional house where Dian Fossey was mysteriously killed in the year 1985 but the more pleasant is the place where she was buried which is located next to her favorite gorilla friend that was also killed by the local poachers.
Rwanda Safaris /Rwanda Safari News
Prime Uganda Safaris and Tours Ltd