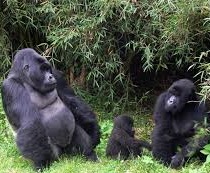 Mountain Gorillas are the best out of the other species because of their heavy coats which protects them from coldness.Their living relies on the way you handle them and protect where they stay. They are only found in Bwindi Impenetrable National Park in Uganda and Virunga Volcanoes in Rwanda plus DRC and it is about 700 plus population according to the census.These rare animals have therefore increased the number of people who come for Mountain Gorilla tracking in Uganda and Rwanda.

Mountain Gorillas share things in common with human beings which makes them closely related to humans. They laugh, hug, play, smile and also when annoyed bang and throw away things nearby which is interesting to watch hence promoting more gorilla safaris. The silverback is a male dominant animal which leads the rest of the animals. The female gorillas give birth to little kids which reduces the population of these gorillas.

They face problems like habitat displacement  since people cut down trees and this makes them cross over to Rwanda thereby reducing the population hence lowering the gorilla trekking safaris.They are also hunted by hunters who search for meat, poachers also is another problem to the animals, Diseases which attack the animals also lead to a small population hence discouraging gorilla tracking in Uganda and Rwanda.

The government is working together with the tour operators so as to fight all these problems. This has helped to develop the tourism sector so as to increase more tourist attractions and hence promote more gorilla safaris in both Uganda and Rwanda