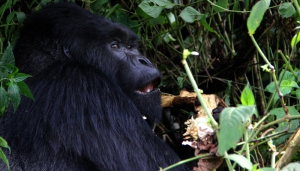 Bwindi Impenetrable National Park has got a variety of Mountain gorillas which have attracted many gorilla trekking safaris to Uganda. However, these primates have been affected by many threats which have reduced their numbers hence affecting gorilla visits.

Bwindi Impenetrable National Park has got many different wildlife which includes; monkeys, birds, and other animals which are added to the mountain gorillas, which are considered to be the great attractions of the park, all these have been affected by the poachers who enter the park and start carrying out illegal hunting of the animals hence reducing wildlife in the Park.

However, the aim of the park management is to help out the local communities living near Bwindi Impenetrable National Park through giving them 10% of the revenue from the park, so that they can help in the conservation of the animals with in the park, this will helping in fighting park encroachment by the local communities. This will help in increasing gorilla tracking safaris to Bwindi Impenetrable National Park.

Another threat to the park management is that the poor people who are living near the park have continuously entered the park, destroying the resources of the forest, this affects the wildlife since they loss their food hence some dying. This reduces the number of animals hence affecting Uganda safaris

The government however has come up with many conservation projects which are put in place in order to protect the wildlife in national parks; this is done in collaboration with the Uganda Wildlife Authority which is responsible for the protection of wildlife in Uganda. These projects have helped in increasing Uganda safaris and gorilla trekking tours to Uganda.