ALL ABOUT THE SILVERBACK GORILLA-Uganda safari News 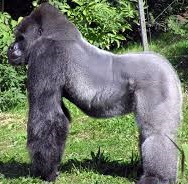 A silver back gorilla is known as a dominant male gorilla which leads the others in a troop and it is given a lot of attention. It was named silver back because of its silver hair at its back which shows its maturity. Therefore it determines where the group moves, settles conflicts and decides what to do in the troop. It takes the responsibility to take the rest to the feeding sites and ensures safety and well-being of those in the troop. This helps the gorillas to look healthy  so as to attract more gorilla tracking safaris in Uganda.

Silver backs are assisted by the younger males known as the Black backs which may give some protection to the troops. These gorillas were named black backs because they lack the silver hair at the back and their age is about 8 to 12 years. This helps the troops to be managed well and protection for the troops. This helps them to maintain their number and also increase them so as to attract more tourists hence increasing the number of people coming for gorilla trekking in Uganda.

Females at times fight each other so that they can access the male and  the male have to separate them therefore female gorillas are a little friendly to each other. However the male have interactions and socialize with each other and at the end engage in homosexual behaviors which is also as a result of strong competition for mates. Due to high competition the female form very strong relations with the male so as to get mates and also protection from predators so as to live long and attract more travelers to come for gorilla safaris in Uganda.