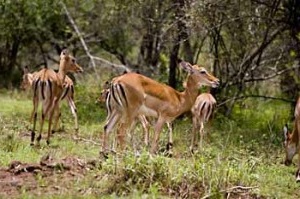 Akagera National Park is one of the famous Rwanda safari destinations which occupy the low-lying savannah plains of eastern Rwanda adjacent to Tanzania. The park is the largest protected area in Rwanda with great counts of wildlife forming the ground for wildlife safaris in Rwanda.
It is such great attempt for the management of Akagera National Park to have offered free access for the national of Rwanda for duration of three days which commenced on 26th November 2014 in commemoration of 80 years of conservation ever since the Akagera National Park was gazetted in 1934 which makes it one of the earliest protected areas to be gazetted in Africa and always encountered by travellers on Rwanda safari tours.
It has been noted that Akagera is liked by Rwandese as they make up to 50% of the visits counting to 10,000 of the Rwanda safari undertakers that visit the park in 2014 so far. It’s unfortunate that outside Rwanda, travellers are more conversant with Volcanoes National Park that is known for gorilla trekking safaris in Rwanda making Akagera to be less explored by the foreigners compared to nationals.
The offering of free access to Akagera National park is motivated by the desire to encourage more people to pay visits the park and develop a sense of ownership regarding their natural heritage and stimulate their conservation interests. This is because the long term survival of Akagera National Park is in the hands of Rwandese. The free access offered included free entry to persons and their vehicles excluding accommodation, other tourist activities and transport to and within. The Akagera National Park is in the preparation of re-introducing black rhino and lions after getting extinct due to human causes. These efforts once successful may increase travellers planning safaris to Rwanda. The park is currently under a 20 year collaborative management between the Government of Rwanda and African Parks Conservation Organization.
Rwanda safaris/Rwanda safari News
Prime Uganda safaris & Tours Ltd safari News