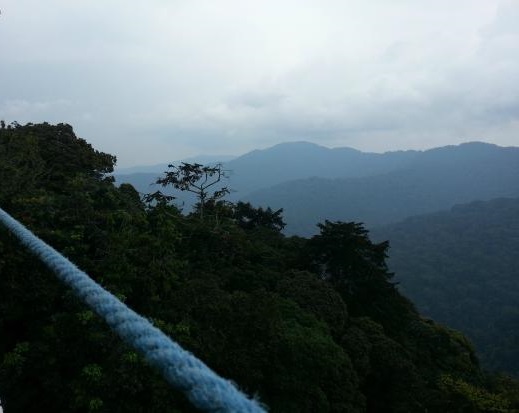 Positioned in the south west of Rwanda, the Rwanda safari destination of Nyungwe Forest National Park is one of the famous biodiversity hot spots on the continent of Africa that have thrived since the pre historic era.
Boasting of 1,020km2 of surface coverage, Nyungwe Forest is gifted with 310 species of birds, 75 bird species and 13 species of primate that can be encountered by travellers on safaris and tours in Rwanda.
Nyungwe Forest National Park is gifted to be the largest and the oldest montane forest protected area in the region of East Africa. In 2004, Nyungwe Forest National Park was declared a national Park thus enhancing the biodiversity protection.
Nyungwe Forest National Park is famously known for its counts of habituated chimpanzees that are always encountered on chimpanzee trekking safaris in Rwanda, largest grouping of colobus monkeys in the whole of Africa and other wildlife species not forgetting avi-fauna that form a rich ground for birding safaris in Rwanda.
Regarding adventure, Nyngwe is till ideal for such encounters. The famous canopy walk which is 200m long and 50m tall is the first of its stature in East Africa and the third of its kind on the continental lands of Africa. The canopy walk apparently costs at 60 USD and the minimum age for participation is 6 years old. The forest also had a good network of trails among which include the Mount Bigugu trail which is an active hike to the highest point in the park offering impressive views of the forest cover while on safari in Rwanda.
The communities around Nyungwe National Park are also thrilling to encounter and thus can be included on the list while planning a safari to Rwanda. The people have impressive music, dance and drama and arts and crafts. The cultural sites like, Cyamundongo Cultural troupe, Banda Community Village, Friends of Nyungwe, Nkombo Cultural troupe and Kitabi Cultural village can be encountered.
Rwanda safaris / Rwanda safari News
Prime Uganda safaris & Tours Ltd