Gorillas Facts; What illnesses do gorillas suffer from? 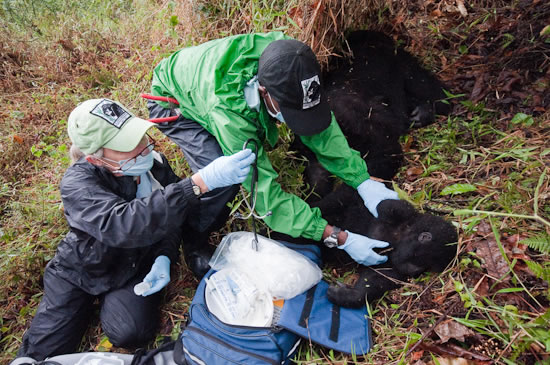 Mountain gorillas tend to inhabit the areas with wet and cold climate which in turn tend to cause respiratory tract diseases especially Pneumonia thus claiming some of the Mountain gorilla lives.

Gorillas of Bwindi, Volcanoes, Mgahinga and Virunga hardly develop teeth cavities. It has been noted that Mountain Gorillas rarely suffer from this disease because they take less fruits thus take in low sugar content. However, the bad tartar of Mountain gorillas causes Periodontitis which dissolves the Jaw bones and eventually causing the loss of teeth.

The Mountain gorillas also have parasites mostly intestinal parasites (worms or Protozoans) which are also experienced among the human beings. However, some of these specialize in these critically endangered mountain gorillas which are normally sought for on gorilla safaris in Uganda.

Since gorillas are under the poaching threats, they normally experience hurts when they land their foot or hand in snares. Gorillas sustain wounds which in turn get infected that gorillas end up losing their lives in the process.

Gorillas are not very far to be attacked by viruses like Ebora. Such Viruses can be transferred from humans to gorillas and vice versa. Thus it is important for gorilla trekking undertakers to prove their health status first before going for gorilla safari in Uganda and Rwanda.

The gorilla facts give a summarized insight into the gorilla life style and allow you know about them like never before.