How do gorillas sleep? Do Gorillas Sleep in Nests? 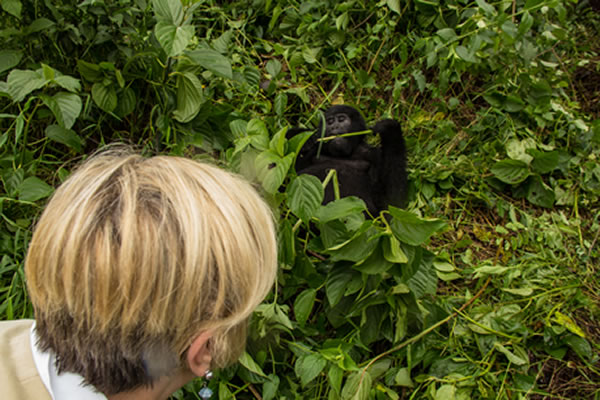 Mountain Gorillas in her nest in Bwindi National Park

The troop will be in a different place each evening, and the gorillas will have to build new nests for the night. Mountain gorillas make their nests from materials such as grasses and bent branches which are readily available Gorillas like most of their primate colleagues, sleep in nests which they patch in the trees or on the ground in consideration of various variables like vegetation and the security conditions.

It should be noted that every evening, gorillas construct new nests – something that is evidenced on your gorilla trekking safari in Uganda and this cannot be avoided even if it is very close to the nest that slept in the previous night.

Another thing to note is that, Infants or call them baby gorillas are the only ones exonerated from the task of making nests as they spend over nights with their mothers.
Gorillas enter into their nests at least one hour before the dark however on rare cases they also build nests for midday rests. Baby gorillas sleep with their mothers but construct nests after three years of age, initially close to those of their mothers.

The Process of Building a New Gorilla Nest Where Gorillas Sleep

The process of building a gorilla nest is not an easy task. Building ground nests involves pulling bush branches and other plants into the center where they are layered and anchored to each other. The other plants are then bent in to create a nest rim. This is in contrast to tree nests which are built in branch forks and other related structures. What is mainly considered with tree nests is that the nest has to be designed to accommodate the gorilla weight that’s why it’s common for young gorillas and female gorillas to spend their overnights in trees because of their relative light weights compared to the heavier Silver back. These nest dynamics are always seen while carrying out gorilla trekking in Uganda in Bwindi and Mgahinga in Uganda or Volcanoes National Park in Rwanda.

Gorilla nests are distributed arbitrarily and use of tree species for site and construction appears to be opportunistic. Nest-building by great apes is now considered to be not just animal architecture, but as an important instance of tool use.