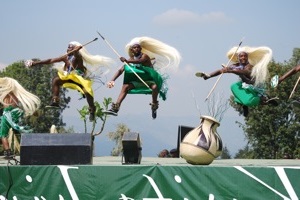 During the World Tourism Day celebrations on 27th September, 2014, the Rwanda Development Board (RDB) unleashed the motive of increasing the returns from Rwanda safari undertakers and tourism in general by threefold in the next two years to $860. For the previous year the returns from tourism were summed at $293 million attributing it to dramatic increase in adventure and leisure tourism.
Rwanda viewed the world Tourism Day as a reflective occasion that should guide the investment in facilities used by those on safaris in Rwanda especially MICE (Meetings, Incentives, Conferences and Events) travellers.
It can be noted that tourism is the main export earner for Rwanda and this potential is still holding light since Rwanda is vast with a range of products from meetings and conferences to culture and religious attractions, recreational and natural attractions including; Chimpanzee trekking, gorilla trekking and wildlife safaris.
The initiatives to fully tap these diverse potentials are already in motion with the construction of Kigali convention center – the largest in East and Central Africa to satisfy the interests of meeting and conference Rwanda safari undertakers, expansion of infrastructure and building convention bureau. The attempts to lure investors to developing golf and spa resort hotels along Kivu Lake and cable car in the Volcanoes National Park highlands are ongoing. A cultural village to showcase the heritage of Rwanda in Kigali city is also in the pipeline. All these are designed to maximize Rwanda’s potential as a safari destination so as to increase safaris to Rwanda and eventually generating the projected increase in tourism returns.
Uganda safaris/Uganda safari News
Wildgorillasafaris and tours ltd