2021 Eruption of Nyiragongo Volcano in Congo

2021 ERUPTION OF  NYIRAGONGO VOLCANO IN CONGO

The 2021 eruption of Nyiragongo volcanoin Congo suddenly begun on the evening of 22 May, leading to the flow of extremely hot lava moving at about 1 kilometer per hour towards Goma town, the capital of North Kivu province in the eastern Democratic Republic of Congo, a  home to around 2 million people. As a result , 32 people lost their lives including 3 children while 3,629 houses were burned and about 8,000 people from Goma where forced to cross into Rwanda for refuge.

The Mount Nyiragongoeruption 2021 also led to the lava flow that covered the main road to the Virunga National Park which is home to rare and endangered Mountain Gorillas and in which this wonderful deadly active volcano is found. This led to the closure of the park and the suspension of all park activities for the safety of the staff and tourists on Congo gorilla safaris.

On 23 May, the lava flow ceased and many people returned to town;  however, on 24 May, a strong aftershock shook Goma and on 25 May, a 5.3 magnitude earthquake struck in the vicinity – destroying many buildings, raising fears that a second volcano eruption was forthcoming. Tremors were felt as far away as Kigali, the capital of Rwanda, 90km away.

On 27 May, Magma was detected underneath the Goma city and the nearby Lake Kivu, raising the possibility of a limnic eruption in the lake. This lead to authorities ordering the evacuation of portions of Goma, leading to the departure of tens of thousands of people. Thankfully, the volcano has now calmed down a bit since. Seismic activity has greatly reduced and the park authorities are preparing to re-open Virunga National Park for visitors on Congo gorilla trekking tours.

Also, Nyiragongo volcano besides being dangerous is a world marvel, and many travelers on Congo gorillas tours and even those on gorilla safaris in Uganda and Rwanda include in their packages the  Mount Nyiragongo climbing/trekking tour to spend an overnight at the summit, watching the spectacular bubbling lava lake in the massive crater below as they take plenty of photographs. Vulcanologists have yet to assess the safety of hiking Mount Nyiragongo on your Congo safari.

WHAT KIND OF VOLCANO IS NYIRAGONGO?

Mt Nyiragongo is one of the most dangerous active volcanoes, rising to 11,400 feet above sea level. This stratovolcano is also one of the few places on earth to feature a persistent lava lake bubbling within its summit crater.

It is part of the stunning Virunga Mountains, a chain of 8 free-standing volcanoes along the northern border of Rwanda, Congo, and Uganda. Other volcanoes include Mount Nyamuragira which is also active, Mount Mikeno, Mount Sabinyo, Mount Muhabura, Mount Gahinga, Mount Karisimbi, and Mount Bisoke. These mountains strung along a fault line associated with the same geological process that formed the Great Rift Valley.

They are famous for hosting more than half of the world’s population of  Mountain Gorillas which are shared amongst Congo’s Virunga National Park, Rwanda’s Volcanoes National Park and Mgahinga Gorilla National Park in Uganda. These parks together with Bwindi Impenetrable National Park of Uganda offer visitors wonderful adventures of gorilla trekking in Uganda, Rwanda, and Congo.

HOW DO VOLCANO ERUPTIONS OCCUR?

A volcanic eruption occurs when magma (extremely hot liquid and semi-liquid rocks) usually at temperatures from 800 to 1,200 °C is ejected expelled from the Earth’s interior through a volcanic vent or fractures in the Earth’s crust. Magma is created when the Earth’s mantle melts due to the Earth’s internal heat. 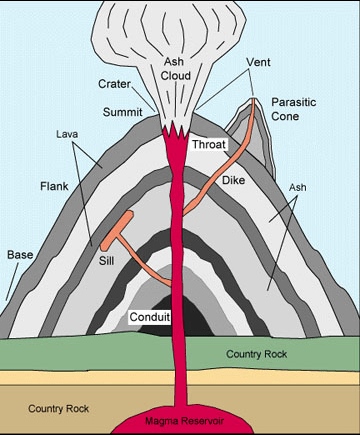 Melting often occurs when tectonic plates are pulling apart or where one plate is forced down beneath another. Because magma is lighter than rock, it rises towards the Earth’s surface and as it rises, bubbles of gas from inside it. If magma is thick, gas bubbles cannot easily escape, causing the pressure to build up as the magma rises. When magma erupts or flows onto Earth’s surface, it is called lava.

Mount Nyiragongo volcano eruptions often occur when the pressure of accumulated magma or an earthquake forces open cracks in the mountain’s flanks, resulting in the catastrophic explosion of magma held further down.

The Nyiragongo volcano has erupted at least 34 times since 1882, including numerous instances when activity was continuous for years, typically in the shape of a churning lava lake in the crater. These past disasters have left volcanologists nervous every time Nyiragongo shows signs of life. Below are some of the recorded deadliest eruption of Mt Nyiragongo;

The deadliest eruption of Mount Nyiragongo of historical time happened in 1977.  During this eruption, a lava lake that had formed in the volcano’s main crater in 1894 was drained in less than an hour. It moved at a speed of  60-kilometer-per-hour (37.2-mile-per-hour), killing an estimated 600 people.

The catastrophic Mount Nyiragongo eruption of 2002 began on 17 January. During Mount Nyiragongo’s 2002 eruption, lava moved down the volcano’s southern and eastern flanks into Goma, killing around 250 people due to carbon dioxide asphyxiation, burns, and a lava-triggered explosion of a fuel station.

Goma was evacuated, and an estimated 450,000 people sought temporary refuge in the neighboring Rwandan cities of Rubavu and Musanze. When the first evacuees returned three days later, it was discovered that a quarter of the town – including huge areas of the commercial and residential center– had been buried by the lava, leaving 12,000 families homeless.

This abruptly worsened on May 22, 2021, around 7:00 p.m. Central African Time, when fissures sprang out in the Nyiragongo volcano’s rocky flanks, spilling lava down its slopes at a speed of 0.6 miles per hour. The lava ultimately stopped at the Buheme neighborhood on the outskirts of Goma city, destroying hundreds of houses and structures.

Around 8,000 people crossed into Rwanda from Goma, according to Rwandan authorities. 25,000 people are believed to have fled to Sake in the northwest of Congo, in addition to those that went to Rwanda. On the night of May 23, the Government spokesperson, Patrick Muyaya, stated 15 persons had died: 2 had been burnt to death, 9 had been killed in a road accident while escaping, and f4 prisoners killed in an attempt to break out of Camp Munzenze prison in Goma town.

Five more bodies of asphyxiated victims were discovered on May 24, bringing the total number of victims to 20. Some of the victims perished on May 24 after breathing smoke and poisonous gas while walking on a section of cooled lava, bringing the death toll to 32. According to the Norwegian Refugee Council, 600 houses and five schools were damaged. Seventeen settlements in the volcano’s vicinity were reported damaged.

WHY IS NYIRAGONGO SO DANGEROUS?

Mt Nyiragongo volcano has a deadly reputation due to a number of factors. It’s one of the few places in the world to feature a persistent lake of lava, boiling within its summit crater.

Also, the mountain’s lava is so fluid and able to travel up to 40 miles per hour due to the tectonic complexity of the region in which it is located.

The magma of Nyiragongo is also rich in carbon dioxide, an invisible, odorless gas. This gas often quietly exudes to the surface via aquifers above deep-seated bodies of degassing magma. Being denser than air, the gas gathers unnoticed in low-lying areas.

Add in the political instability of the region and bouts of conflict, and Mt Nyiragongo volcanic eruptions is a profoundly difficult volcano to monitor.

Volcanologists can monitor and predict the eruption of any volcano close to a large population center since volcanoes usually give some warning of a pending eruption.

Small earthquakes, swelling or bulging of the volcano’s flanks, and increasing gas emission from its vents are all warning signs. None of these indicators necessarily indicate that an eruption is imminent, but they can aid geologists in assessing the volcano’s state when magma is building.

WAS THE 2021 NYIRAGONGO VOLCANO ERUPTION MONITORED BEFORE?

Volcanologists flown in by UN soldiers in 2020 observed that Nyiragongo Lava Lake was filling up quicker than ever before, which was a concerning sight.

A report published in Geophysical Research Letters in August 2020 indicated the probability of a flank eruption between March 2024 and November 2027 based on a comparison of history and present activity at Nyiragongo.

Katcho Karume the director of the Goma Volcano Observatory in September 2020 revealed that the lava lake had been rapidly filling, increasing the risk of an eruption in the next few years, though he also noted that an earthquake could trigger an eruption earlier.

The Goma Volcano Observatory on May 10, 2021, detected an uptick in seismic activity at the summit. This was possibly suggestive of magma moving about at shallow depths, but it was not a dependable indication of an upcoming eruption.

Residents criticized the Goma Volcano Observatory for failing to provide an eruption warning. The observatory’s efforts to keep an eye on Nyiragongo have recently been hampered. Some of its seismic stations had been stolen and vandalized, and the fear of violence had left many of them unrepaired.

Last year, the observatory also lost financial backing from the World Bank due to suspicions of embezzlement. As a result, remote sensors were unable to connect to the internet for several months, and frequent on-site observations of the volcano were impossible.

Despite these ongoing problems, the observatory continued to monitor Nyiragongo with limited funding from the DRC government and in collaboration with other international partners. However, the volcano erupted abruptly, with no obvious geologic indications that it was going to burst.

According to Celestin Kasereka Mahinda, scientific director of the Volcanic Observatory of Goma, a lack of financing made it impossible for the Observatory’s scientists to warn the public about the eruption. Mahinda also urged the residents of Goma to avoid visiting locations that had been affected by lava from the Volcano, therefore avoiding unnecessary travel, because the lavas are harmful and toxic.

Mount Nyiragongo is one of the world’s most active volcanoes. Many people have died as a result of this unstable volcano, and many more are likely to die in the future unless a solution to prevent another tragedy is discovered. Constant monitoring of the volcano’s lava lake level is one approach. Hopefully, with the aid of volcanologists from all around the world, another tragedy in this undeveloped region may be avoided.

Though the volcano is dangerous, it is among the most exciting attractions for many travelers on gorilla tours in Congo. You may wonder if Congo is safe for safaris. Due to all these ongoing challenges, DRC especially Virunga national park and Nyiragongo climbing adventure is currently on hold. Agencies are monitoring the situation till the area stabilizes and information will be posted as soon as tourism resumes again.